A noun names a person, place, thing, idea, quality or action. A possessive noun shows ownership by adding an apostrophe, an “s,” or both (e.g. the bicycle is Sue’s, not Mark’s). Possessive nouns can be either singular or plural.

Children already use possessive nouns and possessive pronouns in conversation by kindergarten and first grade. In second grade, students learn how to turn common and proper nouns into possessive nouns by adding ‘s (apostrophe and the letter s). This practice continues in third grade when students are expected to demonstrate proficiency in creating both singular and plural possessive nouns (e.g. my friend’s toy, my friends’ bikes). 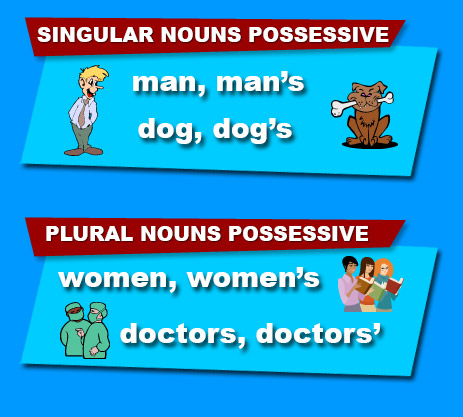 CCSS.ELA-Literacy.L.1.1D
Use personal, possessive, and indefinite pronouns (e.g., I, me, my; they, them, their, anyone, everything).

CCSS.ELA-Literacy.L.2.2C
Use an apostrophe to form contractions and frequently occurring possessives.

CCSS.ELA-Literacy.L.3.2D
Form and use possessives.

Possessives vs. Contractions: its, it’s, who’s, whose, there’s, theirs, your, you’re

VocabularySpellingCity.com provides word lists, printables, and interactive games and activities that give students the opportunity to form and use possessive nouns and pronouns.

Try Word Unscramble with the Four Forms of Nouns – Animals list for practicing both possessive singular and possessive plural nouns.