A plural noun is a word that describes more than one person, place, or thing.

The terminology used to describe plural word lists in K-2 is “one” and “more than one,” with the terms “singular” and “plural” introduced in Grade 3. Grade 2 students practice spelling with some common irregular plural noun practice lists, containing words such as men, women, children, feet, and mice, as they learn which nouns change to a different word to describe more than one.

Word study with plural nouns in Grades 2 and up should continue to provide opportunities for students to demonstrate proficiency in noun-verb agreement. In third grade, more irregular plural nouns are introduced, providing opportunities for students to practice forming plural nouns from nouns that end with a consonant and the letter y (lady/ladies) as well as nouns that end with a vowel and the letter y (toy/toys). VocabularySpellingCity’s plural noun games are a fantastic supplement to classroom instruction.

Grade 4 word study includes exceptions to rules already learned, introducing students to the plural forms of family names, such as “the Kellys,” not “the Kellies”. Fourth grade students also practice plural noun lists to become proficient at forming plural versions of nouns that end in f or fe, such as calf/calves and knife/knives, as well as common irregular plurals, such as sheep/sheep and deer/deer.

In Grade 4 and higher, word study with irregular plural nouns continues, including nouns that end with the letter o, such as solo/solos and tomato/tomatoes, and words that end in z, such as waltz/waltzes. 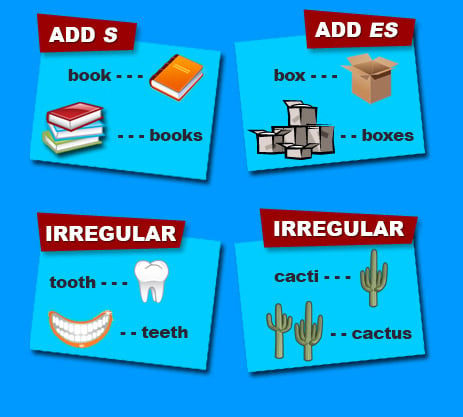 CCSS.ELA-Literacy.L.1.1C
Use singular and plural nouns with matching verbs in basic sentences (e.g., He hops; We hop).

CCSS.ELA-Literacy.L.3.1B
Form and use regular and irregular plural nouns.