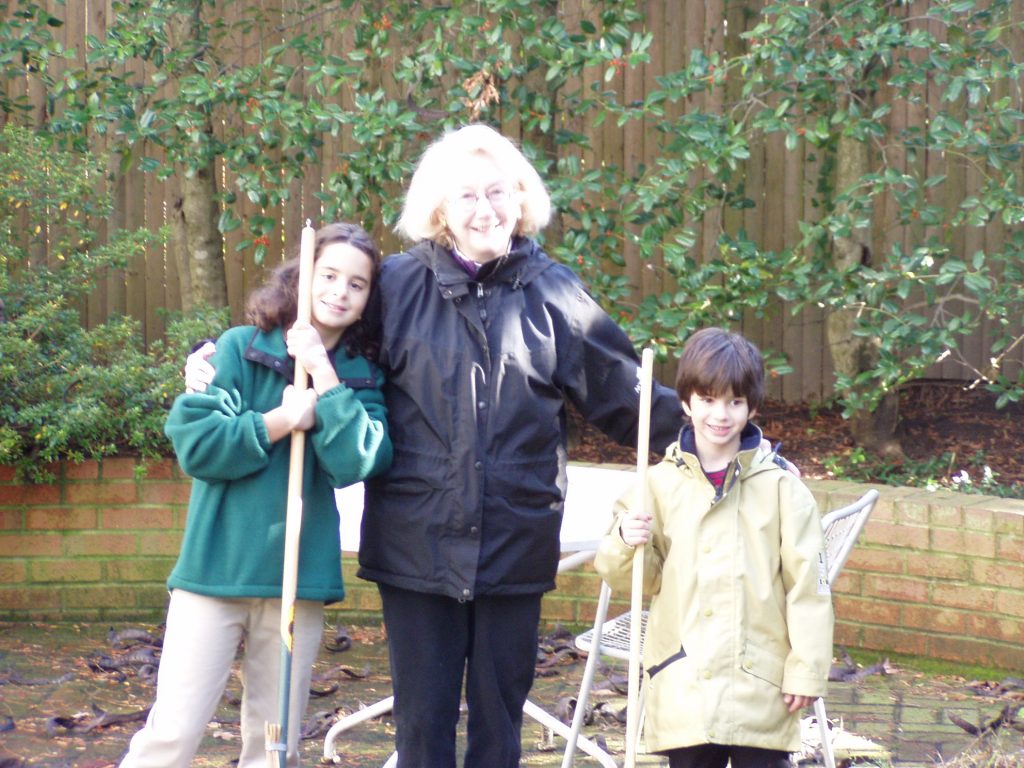 Mom with my kids

I, the founder and self-proclaimed Mayor of VocabularyCity, have – like the rest of you – a mother.  More precisely, I had a mother. She passed on a few years ago at the age of 85.

She was a wonderful mom: bright, verbal, loving, and proud of her sons’ grammar. Yes, that’s true. She was proud of how we spoke and how we used the language. We use to have great conversations on so many subjects.

However, there was a flip side. She really disliked poor grammar and would helpfully correct people when they misused words or didn’t properly conjugate.

If I started a sentence with “like” or if I confused “me” and “I”, there was nobody more reliable or faster at providing feedback than my Mom.  At times, she would read my website and send me lists of poorly punctuated or corrected sentences. Once, to my horror, she discovered on the front page of the site, a misplaced apostrophe in “its.”  I still burn with shame at the thought.

When friends of mine said that “George had played good,” she would help them out with a friendly correction and discuss how the rules work.

Sometimes even new acquaintances or strangers would find her donating her time and energy to correcting their grammar.  Fortunately, she never really mastered the web or or she might have become a “grammar-troll” in her campaign to improve the world’s grammar.

She was a big fan of the “On Language” column by William Safire and of the New York Times Magazine. So, it was fitting that today, on Mother’s Day, the digital fates fed me a TED talk by Mary Norris, a proofreader at the New Yorker.

And in honor of my mom, I will today indulge my inner word nerd.

BTW, “word nerd” in my family would have been known as a “hig pig.”  The question would have been: “What is a hig pig for a person who is very particular about vocabulary?”

My Mom would have loved Mary Norris. I love Mary Norris although I only heard her talk for 10 minutes.  Mary Norris’ professional mission – she says as she starts her Ted talk – for the last 30 years was to be invisible. She works for The New Yorker as a copywriter trying to systematically assure compliance to The New Yorker House Style.

It’s her job to make sure that “The teen-ager’s naïveté as to what people might do for four hundred thousand dollars” is written exactly that way so that readers know they are reading The New Yorker.

I just visited The New Yorker website and searched for their style guide but instead, I found an array of fascinating – to me – articles about style guides. Mary, does The New Yorker publish its style guide? Why not? Surely, it would be a best seller.

Style Guides: For many students, the idea of a style guide is bizarre. It’s hard for students to understand that there is no absolute set of rules about what is right and wrong in the English language, there are just a competing rapidly-evolving set of expectations, conventions, and style guides.

I know that many feel that a keep-it-simple approach to teaching English is superior. Kids spend enough time focusing on learning rules about grammar and spelling without hearing that it’s all debatable and ever changing.

Me, I feel the opposite.  I feel that the Common Core would have been a little better if they had inserted in elementary school some expectations that students would understand that the English language is an evolving set of conventions on which they can have an opinion – and a role – in shaping.

I don’t think it’s too much for a fifth grader to spend some time appreciating that this sentence: “I’ll text the picture to your phone” would have been totally bizarre just twenty years ago. Back then, before “text” became a verb and before our smartphones obsoleted our cameras, while we could take pictures of phones with our cameras,  we could only have put pictures on phones with scotch tape.

I’d like to see if students could be engaged in the debate of whether spelling “e-mail” is ridiculous and whether “email”  is now the only acceptable choice.  Should the “Internet” be capitalized? What about the Oxford Comma: are you for or against?  And can “school” be an adjective? I think that kids are much more likely to get interested in the mechanics of language if they are invited to have an opinion  and are encourage to think about where the rules come from and to observe the creation and evolution of words.

I’ve had luck with my own kids (and, to their embarrassment, with their friends) by getting them to focus on place names. “We’re driving by a sign for ‘Deerfield Beach’  – can anyone see any fields, deer, or the beach? And now we’re entering Fort Lauderdale, anybody see any forts? And why was the fort named for “Lauderdale,” who was that man?”

The result is that my kids seem to have started paying attention to words and engaging their curiosity on them which is a good start.

Mom, I’ll wind this up now with a thanks for all that time you spent getting me to focus on my use of language. I understand that it was an expression of your love for me and for language.  I’m trying to pass it on.  Here for instance is a delightful game to help students untangle the confusion over some popular sound-alike words. (She loved word games including crosswords, Hig Pig, Boggle, and Scrabble)

P.S.: In writing this article, I found that I had to research a few questions since an article on writing properly needs to be self exemplifying (nod to Steven Pinker and his thrilling introduction to his style guide) .

1. Should “Mother’s Day” have an apostrophe and if so, where? I took the position that yes,”Mother’s Day” gets an apostrophe before the “S.”  I have several reasons for this including the fact that the Mother of Mother’s Day (a term that I just created), preferred this spelling.

2. Should “mother” be capitalized?  I took the position after some research that mother is only capitalized when it is used as a proper noun or name.  The tricky point here is when I talk about my mom, is that a proper noun? I think not.

3. I did not have the time (yet) to research whether I am properly using italics and quotation marks. And man, would I ever love to have a Mary Norris to help me out with my writing!!!