VocabularySpellingCity and Science4Us were thrilled to host 40 SuperCoders from Dillard Elementary School in our office this week. 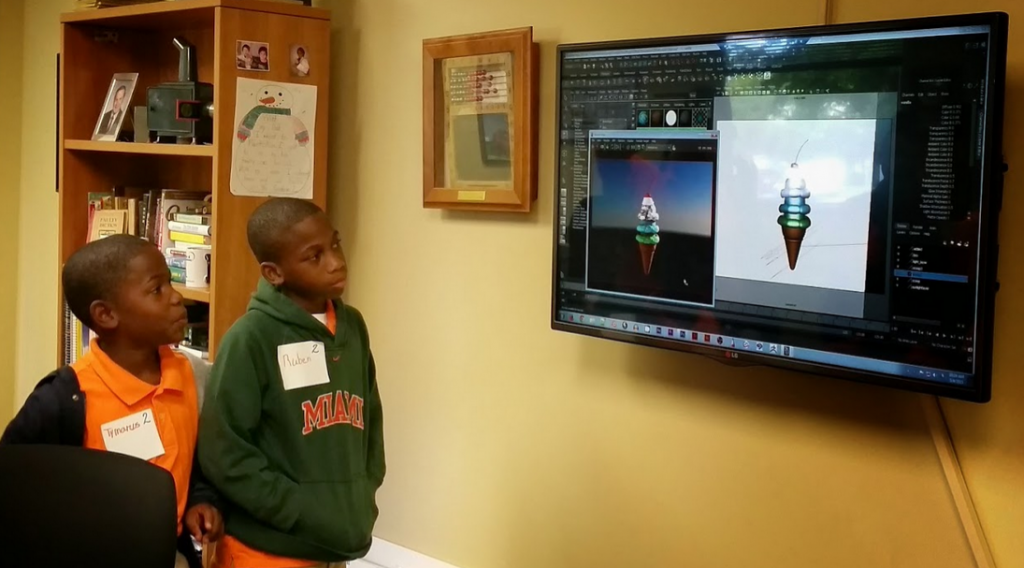 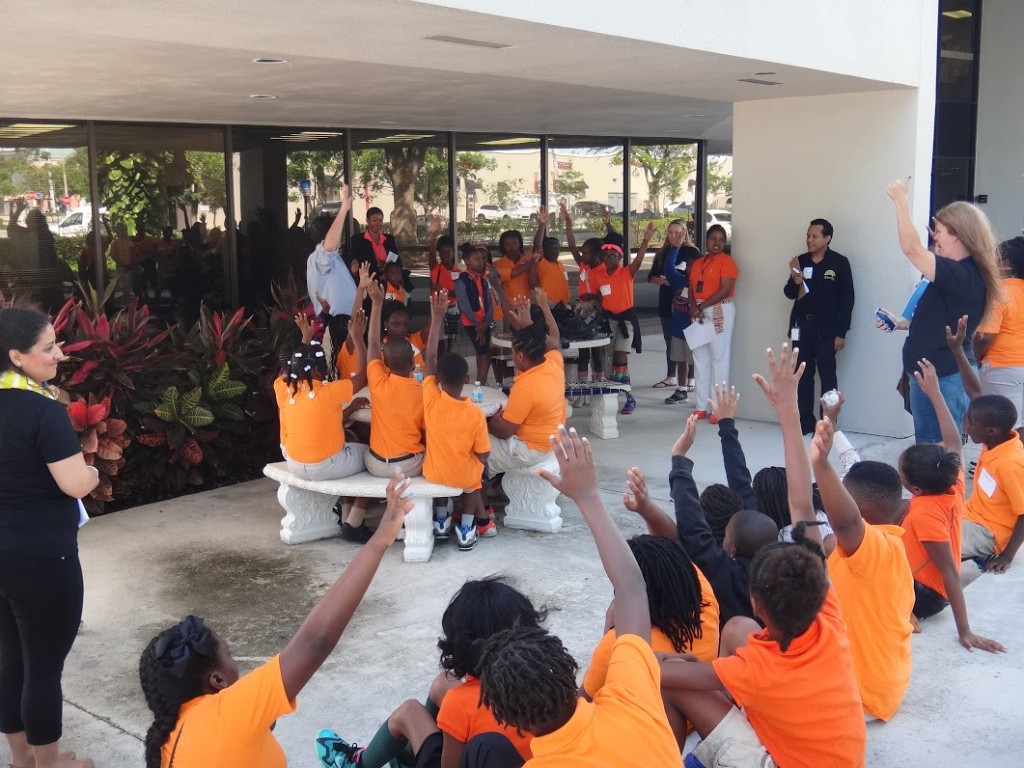 Dillard’s SuperCoders Club attracts students with an interest in technology and computers and helps them build skills and explore the career possibilities. The SuperCoders were accompanied by Dillard Elementary Principal, Angela Brown; Science/Math Coach, TaShara Jean-Baptiste; Literacy Coach, Dr. Tukes; and Science teacher, Ms. Jones-Blake. The students were divided into four small groups and they rotated through various stations to learn about different departments and jobs at VocabularySpellingCity and Science4Us. The stations included: 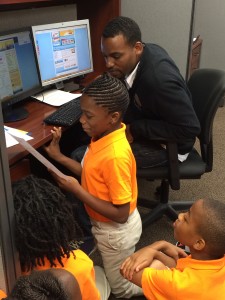 Customer Support – One of VocabularySpellingCity’s largest departments is Customer Support. Our Support team showed the SuperCoders the headsets they wear and how they “talk to customers with a smile.”  The students learned about the scripts we follow when speaking with customers –  saying hello, asking the reason for their call, resolving issues, and thanking them for being users.  As the students were learning how the scripts work, the phone rang!  “Who is ready to answer a phone?” Many hands went up, one was chosen, and suddenly there was Ezekiel on the phone saying (with a smile in his voice!) to a customer: “Hello, VocabularySpellingCity. I’m Ezekiel. How can I can help you?”

Ezekial was a natural! He listened patiently to the question and then asked if he could put the customer on hold for a few seconds while he checked on how to retrieve her password.  What a star!  We rotated roles and everyone got a turn talking to the customers and helping them solve their issues.  This activity helped the students understand the skills they need to learn to be excellent customer support representatives. 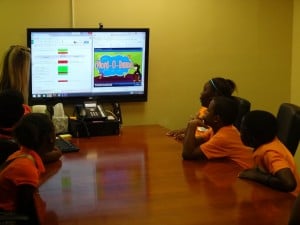 Quality Assurance (QA) was the second station.  The SuperCoders met the people who test web pages and software before it is released to the customers. The QA team showed them a game landing page that contained a number of errors and asked for the students’ help identifying the errors. The Dillard students found four different problems with the page, including misspellings and punctuation errors, missing images and broken links. Their findings were reported on a QA test plan to be shared with our web developer, who would show the students how to fix the errors and implement the corrections on the web page. 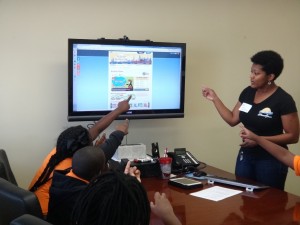 Learning how to fix coding errors

The third station was Coding for Web Design, where the SuperCoders learned about how the development team designs web pages and fixes errors reported by the QA department. The students learned about the basic tools of web design, what HTML looks like, how to update code, and how to use tools like Photoshop to modify graphics. They reviewed the QA test plan and their findings with our web developer, who fixed all of the errors on the web page and showed them the finished product, ready for release to our customers. 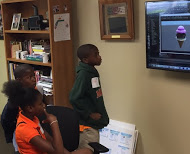 Getting a Closer Look at 3D Imagery

The fourth station was 3D Modeling, where our 3D graphic artist began the training by showing the students images from various animated movies to see if they knew the difference between 2D art (i.e., The Lion King) and 3D art (i.e., Toy Story). It turns out, all of the SuperCoders knew the difference at a glance.  He then asked if they knew how 3D was created.  He opened a 3D tool and pulled out a shape and asked if they could identify it.  “A cylinder!,” they yelled. (It turns out they know their 3D shapes pretty well too.) He squeezed one side and stretched the other, transforming the cylinder into a funnel. Then he adjusted the rim and put three spheres on top of it. “An ice cream cone!,” exclaimed the SuperCoders. Then the artist showed them how he could apply different colors, textures, and lighting schemes until he achieved photo-realistic rendering of the cone with the flavors chosen by the students. 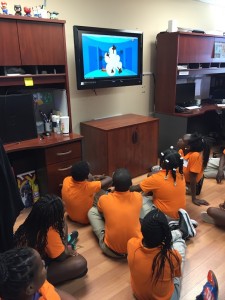 The last station was 2D Art Creation and Animation, where the students learned that movies and animation are a simply a series of images displayed at 20 frames per second, which is just fast enough to trick the human eye to perceive smooth motion.  VocabularySpellingCity character, JoJo the monkey was given new eyebrows and our artists showed the students how to animate his 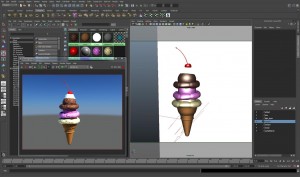 eyebrows to make a very funny expression. The SuperCoders also learned how to create a “ruckus cloud,” the animated cloud used in cartoons to show lots of action or wrestling with occasional glimpses of faces or limbs. Lastly, they learned how the animations can be inserted into the code of interactive exercises that those seen in Science4Us and VocabularySpellingCity.

We had a fantastic time hosting this incredible group of students. This experience gave our staff the opportunity to interact with students who actually use our sites, and the students learned about a range of career possibilities and what it takes to run an educational technology company. It was truly a win-win situation for everybody involved.

The following is a short video, made in 2014, about the career possibilities available at our company. If you have trouble viewing it here, click over to the Careers page to see it. 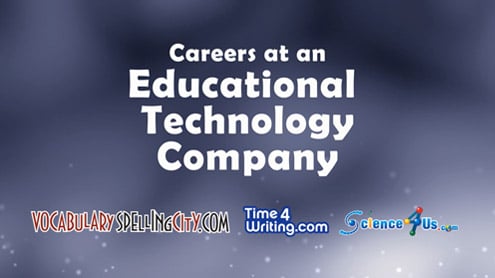 Special thanks to everyone involved in the effort to pull the exciting morning together. The producers at Dillard were Science/Math Coach, TaShara Jean-Baptiste; Literacy Coach, Dr. Tukes; and Science teacher, Ms. Jones-Blake;  and at VSC & S4U: Jennifer Mercury and Kris Craig.  The presenters were Aaron, Nancy, John, Juliana, Bertrand, Rik, and Renee. The team leaders were Spirit, Kris, Dany, and Nela.

The Dillard team was led by Broward Principal of the Year, Angela Brown; and the Executive Producer was John Edelson.

Question: Would we host students from other schools at our offices for a similar experience?
Answer: We’d love to. Of course, we particularly like it if they are customers for our products.

BTW, our office is in Fort Lauderdale, FL at Cypress Creek and Andrews.

Leave a Reply to Handy Senatus