My tweet proclaiming such a large order of books caught the attention of the authors, who liked, retweeted and followed me! After realizing my mistake and feeling guilty over my accidental deception, I decided to message the authors directly. I apologized and assured them I was still very excited to receive my single copy of their book.

One of the authors, Billy Krakower, replied that he is a fan of VocabularySpellingCity and had previously written a blog about our site being a resource for learners with disabilities. I met up with Billy for breakfast to learn more about how he uses the program. Our conversation was eye-opening for me, and I couldn’t stop thinking how happy I was that Twitter brought us together!

Billy Krakower (@wkrakower) is a Special Education Teacher at Beatrice Gilmore Elementary School in the Woodland Park, N.J., Public School District. He explained that his students struggle to decode words, and once they do, they find it challenging to retain the words. Upon reviewing the mandated vocabulary workbooks for the upcoming year with his colleagues, they quickly realized that the directions for activities were not clear enough for their students, and the workload for each lesson was unrealistic. They wanted another option. 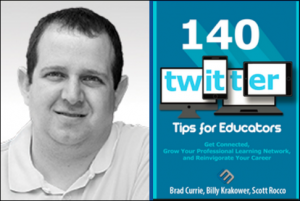 Educator Billy Krakower and his book!

While searching online, Billy found VocabularySpellingCity, He noticed that its games provide both visual and auditory clues for decoding words, and saw how brightly and boldly the words were written on the screen. He realized that this program was the perfect tool for his students, since “We have students who get easily frustrated when trying to read a word, or when looking at a page that is overcrowded.”

Billy suggested VocabularySpellingCity to his principal, who approved the decision for using the site, as long as the words Billy entered into the site were pulled from the workbook. This can be easily done, as teachers have the option to upload ready-made lists or create lists with words of their choosing.

Billy’s hopes for the program proved true. The activities helped students hear words broken into initial sounds, final sounds and syllables. They could also hear the words explained with student-friendly definitions, and used in contextually rich sentences. This helped them decode and remember word meanings. As Billy put it, “When we assign students a learning activity, they can hover over the word to hear how it sounds, listen to the word’s definition, or hear it used in a sentence. This test feature truly helps students who struggle to read.”

Just like the parents, Billy found that his students were not only succeeding in vocabulary, but also that they actually wanted to do the work. Billy feels that “VocabularySpellingCity has truly been a game changer for our students and parents this year.”

I want to thank Billy for providing valuable feedback about how he uses VocabularySpellingCity with his students, and am pleased that they are enjoying the activities. My accidental Twitter fail resulted in a new friendship, and I can’t wait for my Amazon package to be delivered.

One thought on “It all started with a tweet.”